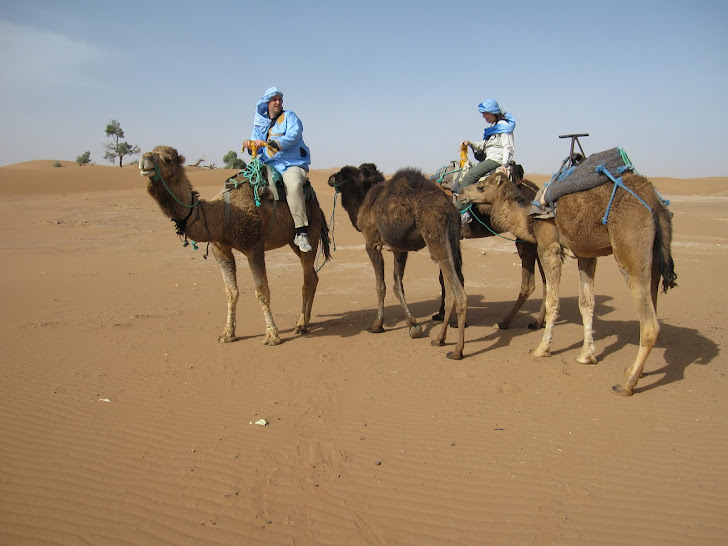 Today we knew was going to be a heavy driving day as we were heading as far as the road goes to the south east corner of Morocco. Finally getting away from the cities and out into the beautiful country side and believe me, in Morocco there is scenery to suit every taste.
The road started to climb into the Middle Atlas and it almost felt like an area of Scandinavia with conifers and gently rolling hills that led into bigger mountains. In some of the small towns even the structures looked vaguely Swiss! It had the same soothing bucolic feel too which felt really good after the frenzy of the cities. 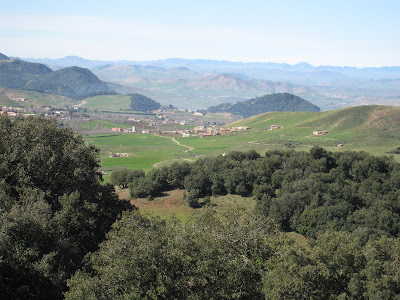 I had viewed this day with some trepidation as I am not a particularly good car passenger, even worse if I am not sitting at the front so I was armed with my motion sickness bands and had my Dramamine close at hand but I needn't have worried, Brahim was such a smooth, careful driver I felt absolutely fine - Hurray! Our first stop was an area of the Middle Atlas known for its 'Barbary Apes'. Although the species is commonly referred to as the "Barbary Ape", the Barbary Macaque is actually a true monkey, not an ape. The monkey is yellowish-brown to grey with lighter undersides, growing to a maximum size of 30 inches and 29 pounds. Its face is a dark pink and its tail is vestigial. The front limbs of this monkey are longer than its hind limbs and the females are somewhat smaller than males. The habitat of the Barbary Macaque is under threat from increased logging activity; they are listed as endangered by the IUCN Red List. Local farmers view the monkeys as pests, and engage in extermination of the species. Once common throughout northern Africa and southern Europe, there are estimated to be just 12,000 to 21,000 Barbary Macaques left. I must admit that the area we stopped in was pretty sad, there were masses of tour buses and roadside vendors selling nuts to feed to the unfortunate creatures although most people seemed to be using these as missiles rather than food, along with anything else that they could put there hands on to hurl at them!
I walked away from this rather sickening circus into the trees and within a few yards had left the crowds behind and was able to watch these animals behaving in a more natural manner. 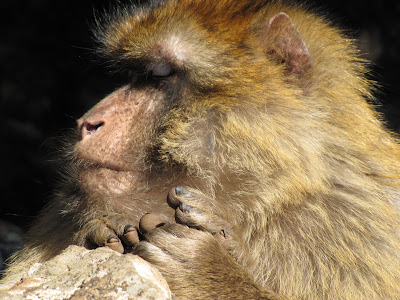 They did deign to open their eyes briefly just in case I was another sucker who had purchased a bag of food but then when they saw my hands were empty they went back to doing their thing. 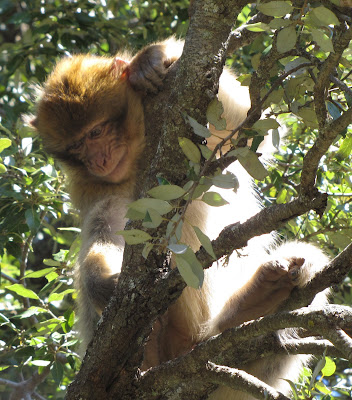 Which seemed to comprise largely of just enjoying the early morning sun. 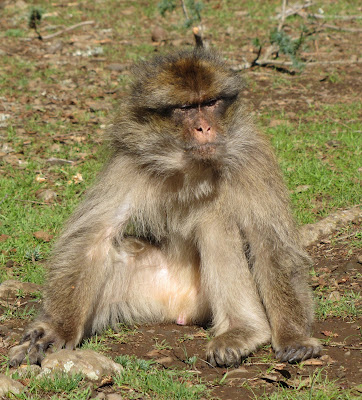 I have never been a huge fan of primates as a group but when they are relaxed and natural like this little group was I could certainly see their appeal. As most of you know, I have a preference for creatures with either feathers or scales and I soon became distracted by this charming little character who drove me crazy in my vain attempts to get a decent photograph. 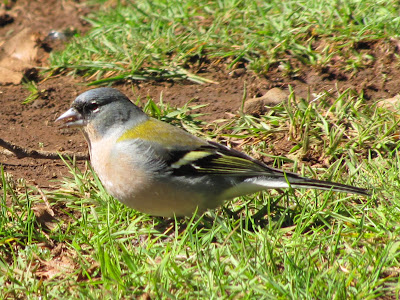 As you will discover in later posts I was totally on my own when it came to learning the birds in Morocco and although this one looked somehow familiar I wasn't sure at this stage what I was looking at so I snapped away figuring I could then compare my pictures with my field guide and work it out. (And that is another thing - Morocco is the first country I have ever visited that doesn't have a field guide to the bird species found there!) After our little break we hit the road again and I started working on identifying my little friend. Imagine my surprise when I discovered it was nothing more than a lowly Chaffinch! The same species that I see on a daily basis when I visit my parents in England! But it looks completely different! Then I discover that there is a North African subspecies Fringilla coelebs africana and yes, it looks totally different from its Europe counterpart (and much prettier!) 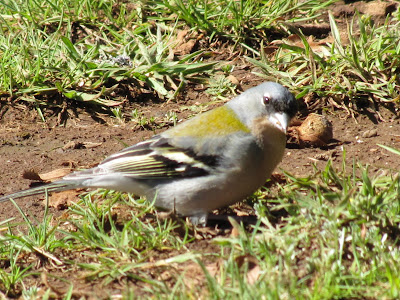 So on the road again the scenery continues to get more dramatic as the Middle Atlas unfolded around us. 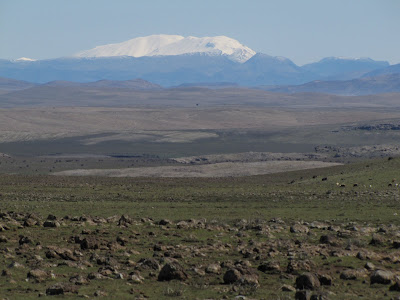 Even in the most inhospitable, windswept areas there was always something to look at. 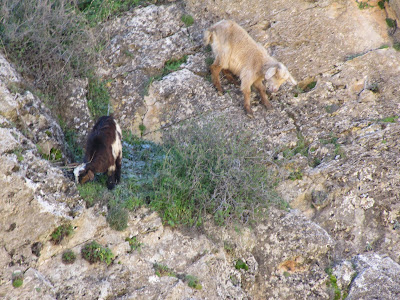 Before we had arrived in Morocco they had had the first really good rainy season after fifteen years of drought so even in the rockiest areas of the mountains we would see tiny patches of green and shallow pools of water defying the odds. 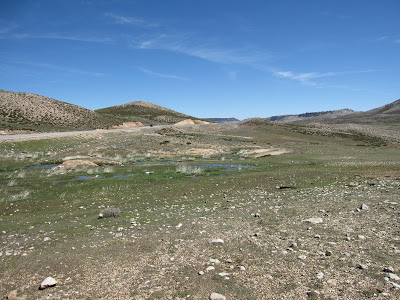 We went over the Middle Atlas and then descended into the Ziz Valley.
More dramatic scenery, less open and rolling and more tortured and twisting. Some of the gorges were quite stunning and the road twisted and doubled back on its self following the course of the Ziz River as it carved through the rock. 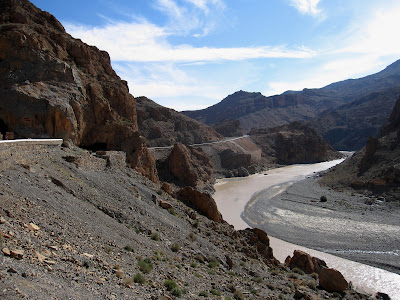 Slowly the valley opened out and here the geological features became even more remarkable. I have never seen striated rock that has been forced into such contortions by subduction that the striations actually run completely vertically!
There was a reservoir which I had asked to stop at because it was a known birding spot but as I was to discover as soon as a human approached to nearer than a hundred yards from the waters edge every bird took flight so other than some brief glimpses of Ruddy Shelducks it was a little frustrating. 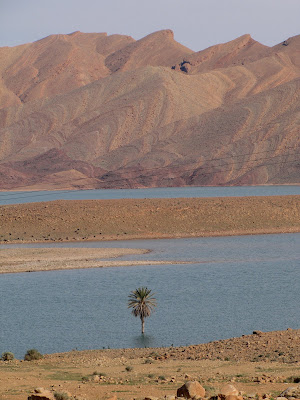 As the valley grew wider the flood plains either side of the river created amazingly verdant areas that were in stark contrast to the windblown, rocky scenery that we had been through earlier in the day. There were endless stretches of date palms and citrus trees all flourishing. 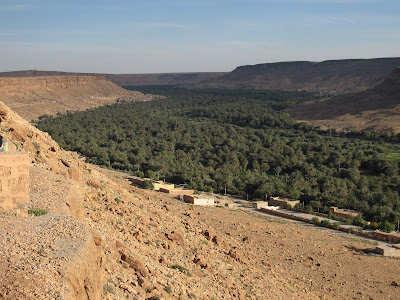 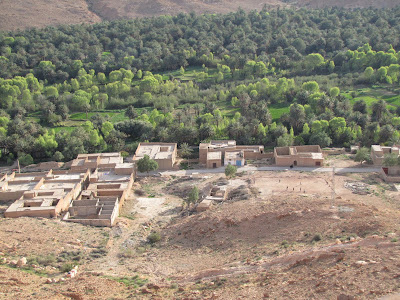 And we had glimpses of rural Moroccan life going on as usual. 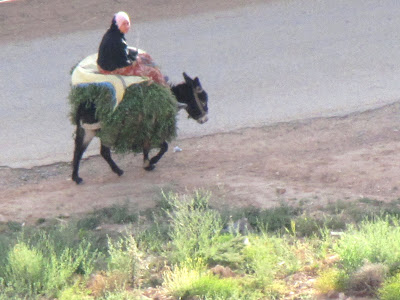 Eventually the Ziz river runs out into the desert and peters out. We had finally reached the end of the road, quite literally, and our destination for the night - Hotel Tombouctou. 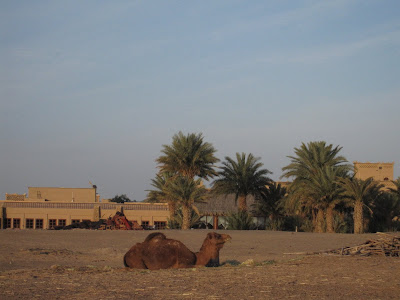 The hotel backs on to a beautiful expanse of sand dunes and now I was finally beginning to feel as if we were 'getting away from it all!'
The undoubted highlight of the day for me was after dinner, we walked out behind the hotel into the desert. We were finally away from all light pollution and it was a true dark African night. How I have missed the African night skies with its millions and millions of stars. We stood quietly in the darkness, quite spellbound by the magnificence of it all and then we heard soft footsteps behind us in the sand. Out of the darkness loomed a camel, strolling quietly through the desert night!
I think I am in heaven! 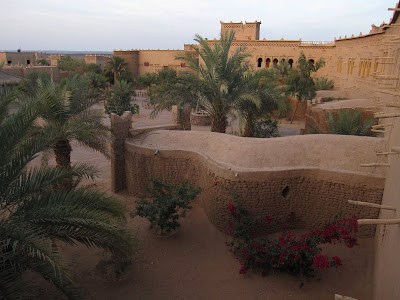 Beautiful photos. If car ride can be such an adventurous one, I would also prefer one.
Morocco merzouga

I'm Mohamed africa i welcome to the beautiful moroccan land and quiet magic desert , we will be happy to share with you all great moments of your holidays in morocco,We are berber people born and raised in the desert with our family in southern Morocco, Our childhood was with nomadic life, traveling around the desert with the family, Every month we change the home to nother home looking for a green place for our animales as camels and goats ,Our experience started with guiding the guests from a several hotels in merzouga desert, We learned many langues as English, Spanish, French, Portugues , with the parents we learned our mother langues Berber and Arabic as my second language from the same religion of Islam ,Now after nine years of guiding the travelers from around the world in morocco,We started from few years ago to organize Camel trekking in erg chebbi desert for spent one night in desert by camels ,and more nights like nomade people in their old life ,Trekking in merzouga desert,Yoga meditation with all necessary , Rent 4x4 to explore the area of merzouga , but we avoid the sand dunes to respect the value of the nature, to discover the environment and to teach you about our culture . 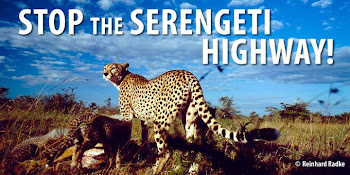 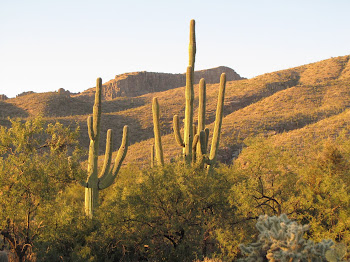 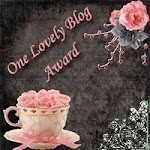